by Cultural Survival on March 10, 2016
The international community has been reeling after the gunning down of Indigenous Lenca activist Berta Caceres of Honduras, well known and loved around the world for her dedication and commitment to her community, their lands, and protecting the environment.  Last week on March 3th, Berta was assassinated in her home by a death squad, after years of documented threats and harassment by Honduran military and private security of the hydroelectric dam company DESA.  Here are six concrete actions you can take to fight back for Berta and multiply the work she was dedicated to.
1) Ask the FMO bank to withdraw investment from the Agua Zarca project.
Berta stood up to corporations and helped delay the construction of the Agua Zarca dam which, if built, would destroy her community’s land and the Gualcarque River in Honduras. The dam was delayed due to protests for so long that investors started pulling from the project. As a result, Berta became a target for corporate spying, intimidation, and ultimately murder, simply because money wasn’t being made.   This is why we are calling on the largest remaining investor of the dam, FMO (a Dutch Development bank) to join the Chinese investors Sinohydro and the International Finance Corporation in withdrawing financial support for this project immediately.
2) Call on Authorities to Protect Gustavo Castro Soto, murder witness and assassination target.
Gustavo Castro Soto, a Mexican human rights defender, environmental activist and long-time ally of Berta and COPINH, was also shot during the attack.  Gustavo is the sole witness of the murder, and is currently being held against his will by Honduran authorities. In a note to some friends on March 6, Gustavo wrote, “The death squads know that they did not kill me, and I am certain that they want to accomplish their task.” Take action to ensure his safety by calling on Honduran, Mexican and embassy authorities demanding security for Gustavo, and to halt the criminalization against COPINH.
3) Call on the U.S. Department of State to take concrete steps
Berta was a vocal opponent of US backed 2009 presidential coup in Honduras. COPINH denounced the coup d’état as an instrument of violence serving transnational corporations to exploit resources and to repress the dissent of social movements. She also opposed continuing US military bases on Lenca territory.  The United States played has played a major role in legitimizing the 2009 coup and funding the right wing military government that has formed since.  In 2011 Washington authorized $1.3 billion for U.S. military electronics in Honduras,  and U.S. military expenditures for Honduras have gone up every year since 2009. Yet in the years since the coup, human rights violations in Honduras have increased at an alarming rate: roughly 150 environmental and human rights defenders have been killed.  Berta was a strong opponent of US military presence in Honduras. The Department of State and the US ambassador to Honduras have issued statements of condolences to Berta Caceres family and condemning her death, but stop short of describing concrete steps being taken to address the underlying issues prompting her assassination.
Write to the US state department demanding the following:
Pressure Honduran authorities to ensure the security and prompt release of Gustavo Castro.
Support COPINH’s demands that the Honduran state sign an agreement with the Inter-American Commission on Human Rights (IACHR) to send independent experts to conduct a clean, impartial, and transparent investigation.
Ensure that no US aid goes to military units repressing the Lenca people of Rio Blanco and encourage the Honduran government to withdraw the military from the zone.

4) Ask Congress to Suspend Funding for the Alliance for Prosperity
Berta was a vocal opponent against the Alliance for Prosperity, a plan for US funding to Central America was recently approved by US congress to  provide $750 million in military financing and training million to Honduras, Guatemala, and El Salvador, as well as to facilitate investment in extractive industries, including a massive gas pipeline from Mexico to Central America. But preconditions for percent of the total funds mean that countries will have to prove they are working to reduce migration and human trafficking, combat government corruption, and decrease poverty—just some items among a considerable list. The U.S. State Department and Agency for International Development, which are jointly in charge of administrating the money, will have to report to Congress by September 30 2016 on whether sufficient progress has been made, and if not, funding can be suspended.

6)  Spread the word
Share this list with family, friends, and networks, as well as the following statements from Berta’s family and colleagues:
Statement from the daughters, son, and mother of Berta Cáceres
Urgent denunciation by COPINH

Theytus Books is please to announce the Gatherings-Water project and a call for writing submissions from B.C. based Indigenous Youth on the theme of water. The Gatherings-Water anthology will be published in November 2015 and those writings chosen by an editorial committee will be featured in the book as well as receiving an honorarium and complementary copy.

This special book marks the return of the Gatherings anthologies that were a mainstay of Theytus Books’ publishing program for a decade. In addition to the anthology, there will be community engagement writing workshops in four B.C. Indigenous communities (locations and dates to be announced) blogs on the Gatherings-Water website and news and links to issues vital to the importance and future of Water in the B.C. region.

The Gatherings-Water project reflects the cultural rejuvenation of Indigenous Youth in B.C. It is not only a revival of a respected anthology series, but also a new level of engagement between publishing house and community, between established writers and emerging voices, and finally a testament to the connection of Indigenous Youth with the life-sustaining power of water.

This call for submissions is open to Indigenous Youth in the province of B.C., 30 years of age and younger.

Submissions can be prose, poetry, nonfiction or based on legends or teachings. Submissions should not exceed 3,000 words.Email your submission as a .jpg, .pdf, or .docx with a short biography of yourself to publisher@theytus.com. Please include 2-3 lines about your submitted work and what water means to you.

While we [at the Indigenous Health Garden] work with the soil most days, our health, identity, and ecological/social communities are intricately tied up in the water. From the rains that nourish our medicines to the fish we cook at our feasts, it’s important that we honour and advocate for the water and especially the future of wild salmon. We’re excited to share the news of this upcoming convergence in Secwepemc territory this October! 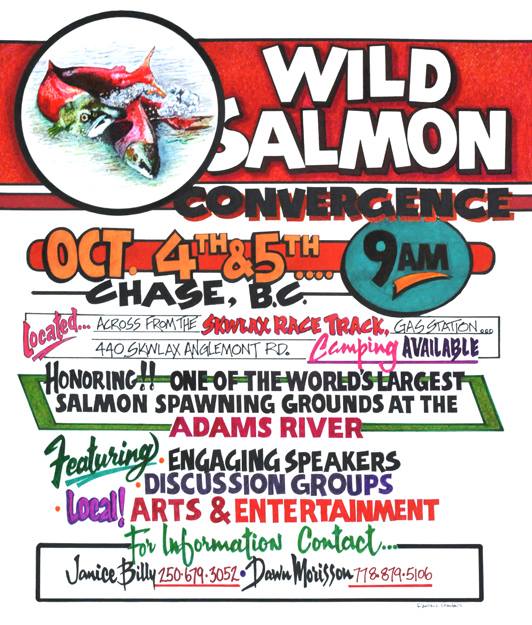 The wild salmon need our help more than ever, and one way to do that is to appreciate their beauty, strength and resilience in their journey home to play out their birth and death in the Adams River – a river system with some of the oldest geology in BC, and rich in culture and heritage to the Secwepemc and all people who inhabit the region.

Please distribute the attached poster invite far and wide to your friends, families and co-workers to come honour and witness one of the worlds largest sockeye salmon spawning events in the world!

Crude petroleum spill site. The company as in the process of covering up the spill with clean earth dug from an area nearby.

Our friends at Alianza Arkana just released a new documentary filmed in the Pastaza river basin in the Amazonian region of Peru.

PASTAZA illuminates the reality of the indigenous peoples who live in the Peruvian Amazon, in zones of severe contamination resulting from almost half a century of oil exploitation. This film chronicles their struggle for well-being and the determination of their federations to raise the voices of their people, demanding justice.

This entry was posted in News and tagged Indigenous peoples of the world, Indigenous rights, water.

Join the SAGE listserv by emailing the SAGE Provincial Coordinator at grad.sage@ubc.ca